The Manwan Dam in Yunnan Province is one of the four first dams in the main stream of the Mekong River. People downstream already point fingers at the Chinese dams for reduced fish numbers. New dams in Laos will seriously alter the ecology of the river.

An Environmental Impact Study of the Mekong River Commission concluded that a ten year moratorium should be imposed on the construction, to do further studies on the impact of construction of such a dam.

Laos has reportedly commenced preparations on the construction site in the past months creating fears it will proceed with or without permission of its neighbors. A petition of more that 20.000 people was submitted today to the prime ministers of Thailand and Laos to cancel all construction.

See the press release below of International Rivers, a US based NGO that opposesthe construction of any dam on the Mekong River. 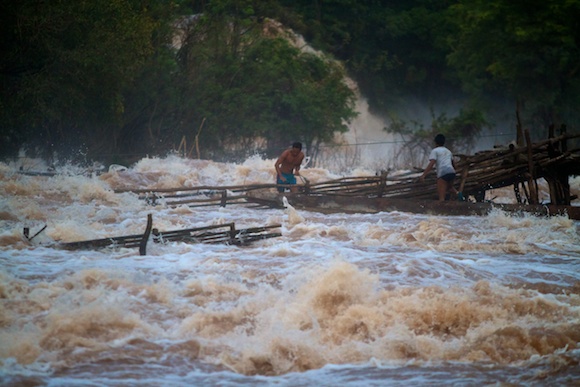 Fishermen in the Khone Falls in the south of Laos may have to change their ways after the construction of the Xayaburidam in the Mekong River.

Bangkok, Thailand – 22,589 people from 106 countries submitted an international petition today to the Prime Ministers of Laos and Thailand, calling for cancellation of the proposed Xayaburi Dam on the Mekong River in Northern Laos. The petition comes one week before the four Mekong governments meet on December 8th in Siem Reap, Cambodia, where they are likely to decide whether to proceed with the project.

The Xayaburi Dam is the first of eleven dams proposed for the Lower Mekong River. The petition expresses grave concern about the future of the Lower Mekong Basin, and urges the Prime Ministers to cancel the project and defer all decisions on Mekong dams for a period of at least ten years, until further studies can be conducted. The petition was presented to Thailand’s Government House and the Lao Embassy in Bangkok on Wednesday.

“The people of Southeast Asia and concerned citizens around the world have once again voiced their opposition to the Xayaburi Dam,” said Pianporn Deetes, Thailand Campaign Coordinator for International Rivers. “The whole world is watching. We do not want to remember December 8th as the day the Mekong died.”

The petition comes a day after the U.S. Senate Foreign Relations Committee unanimously approved a resolution by Senator Jim Webb calling for the protection of the Mekong River Basin and for delaying mainstream dam construction along the river. The resolution calls for the U.S. Government to allocate more funding to help identify sustainable alternatives to mainstream hydropower dams and to analyze the impacts of proposed development along the river.

“The Committee’s adoption of this resolution sends a timely signal of U.S. support for the Mekong River Commission’s efforts to preserve the ecological and economic stability of Southeast Asia,” Senator Webb, chair of the Senate East Asian and Pacific Affairs Subcommittee, said in a statement. “The United States and the global community have a strategic interest in preserving the health and well-being of the more than 60 million people who depend on the Mekong River.”

Although Laos is proposing the dam, Thailand is also playing a key role as investor, project developer, and purchaser of 95% of the dam’s electricity. The petition calls on the government of Thailand to cancel its plans to purchase electricity from the Xayaburi Dam and any other Mekong Mainstream Dams.

“Laos has a duty under international law to provide enough information about the regional impacts of the Xayaburi project to allow its neighbors to make an informed decision, but it has yet to do so,” said Sor.Rattanamanee Polkla, a lawyer for the Community Resources Centre in Thailand and a member of Mekong Legal Network. “Moreover, Thailand, as the primary beneficiary of the dam, should be equally responsible for providing more information about the project’s impacts. Under international best practice, Thailand should assess all energy options before deciding to dam a river of such importance for millions of people’s livelihoods, in line with the recommendations of the Strategic Environmental Assessment sponsored by the Mekong River Commission.”

“Through this petition, the international community has spoken out against the Xayaburi Dam as this is a river of global significance,” said Guadalupe Rodriguez, a member of the German-based organization Rettet den Regenwald (Rainforest Rescue), and one of the sponsors of the petition. “We cannot allow a privileged few to trade away the biodiversity and ecosystems that feed millions, as it would spark tension in the region.”

At a meeting in April, the governments of Cambodia, Thailand, and Vietnam raised concerns about the Xayaburi Dam’s transboundary impacts and recommended further study and public consultations. The four governments could not agree on a solution, and elevated the decision to a ministerial meeting now scheduled for December 7-8.