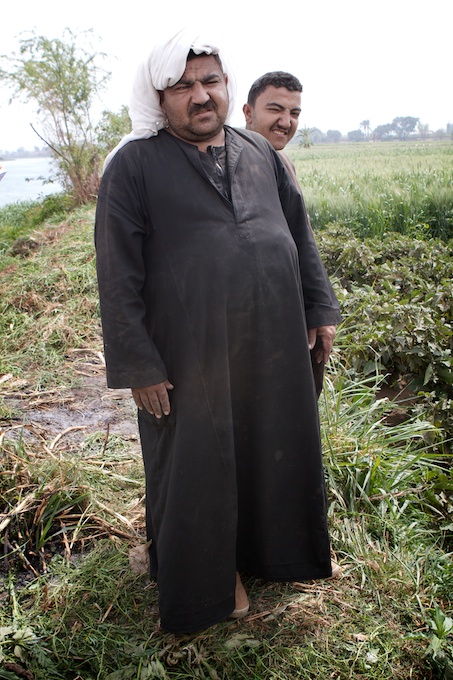 Mr. Abdel Geber Regab and his son Ahmed on the bank of the River Nile.

Abdel Geber Regab is 42, but he looks at least ten years older. He lives in Beni Ahmed, a village along the Nile, three hours south of Cairo. Life is hard here, and working the land is even harder. ‘Of course my back hurts! Every farmer has problems with his back, but we are used to it. We have been farmers since Pharaonic times.’

Mr. Regab works the land by hand, together with his three sons and some other family members. Eggplant, wheat and Lucerne (a kind of Alfalfa), that’s what he produces. The eggplants and wheat he sells at the market in nearby city El Minya, the lucerne he uses as fodder for his two buffalos. `I would like to have more land, but it’s too expensive. I own half a feddan (acre), and I rent another half feddan from a rich landowner. I pay about 1000 Egyptian pounds (roughly 120 Euro – JK) for it per year, which is really a lot of money for me.’

His rented land borders the river Nile, but Mr. Regab is not allowed to use this water. `I have to pump up my water from a well, about thirty meters deep.’ He takes us to an old diesel driven water pump, with which he floods his land each week. `It costs me 15 liters of diesel each time I irrigate.’ 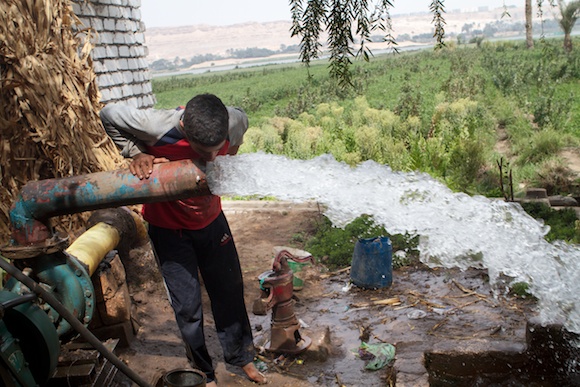 Irrigating the land, and a boy.

Even if Mr. Regab would have more money to buy land, there’s nothing available. On both sides of the narrow strip of fertile land along the Nile, there’s the desert where farming is impossible. What will happen with his three sons? Will they take over his farm when he’s old? Mr. Regab looks aside to his son Ahmed, 19 years old, dressed in a djellaba, smiling friendly, saying nothing, standing in the desert heat. ´I hope he will take over. I hope there will be enough land for my sons. Insha´allah.’