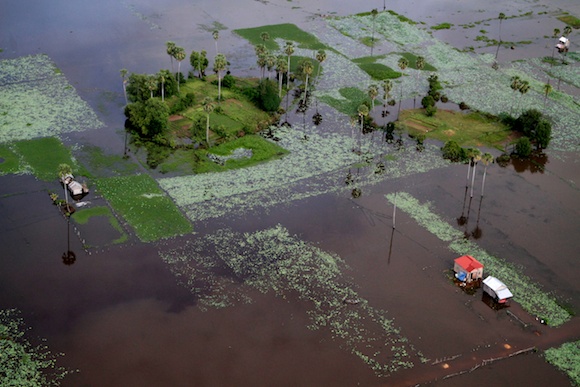 This year’s flood has submerged too much land. It’s good for the fish, but not for the farmers and fishermen.

Correction: According to Prof. Chavalit Vidthayanon, fishery expert of the Mekong River Commission, this flooding may actually cause the spread of invasive non native species from fish farms. This may endanger local fish species.

André and I have been on the road along the Mekong River in the past 2 weeks. We revisited some places on the Tonle Sap Lake in Cambodia that we visited last May already. It was great to see with our own eyes the huge difference in water level between the dry season and the wet season. Unfortunately for the local population this wet season brought the highest flood in 11 years, submerging whole villages that normally stay dry and even flooding the center of tourist city Siem Reap near Angkor Wat.

In a way the extremely high water this year does not illustrate the story we want to tell which is the benefits of the fluctuating waters in the lake. The high water is the time that billions of fish spawn in the lake. The flooded land that is covered in bushes, forests and rice fields provides a safe haven for the young fish. Without the flooding this safe haven disappears, seriously affecting the livelihoods of hundreds of thousands of fisher families. But when you ask these families right now, they complain about the high water that floods their houses and disperses the fish temporarily making it hard to catch enough for daily sustenance. 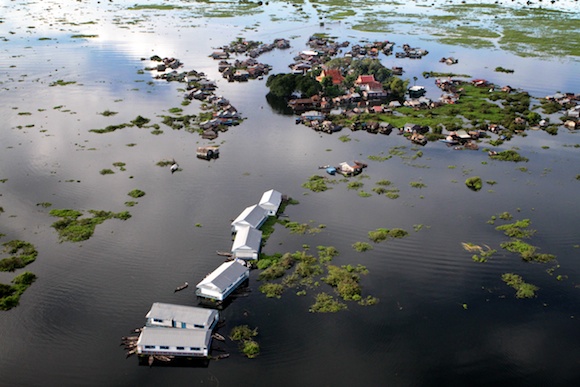 The floating villages in the Tonle Sap Lake were not much affected by the extra high flood. Their location, though, was many kilometres from where we encountered them a few months ago.

We did manage to take aerial photos this time. Last time the weather was too unpredictable. This time it was a close call too. We had rain and thunderstorms every day. But the first morning we had in Siem Reap we took a flight at seven in the morning, the light did fade away a little behind the clouds during our round trip over two floating villages. Be we managed to produce some good pictures and some great video.  The days after we didn’t have any good mornings or evenings anymore.

It was our most expensive fight so far 35 minutes in a helicopter for US$ 1000. But it was a great experience and looking at the images it was worth it. Thanks to all our financial backers we managed to do this.  Thank you very much, your contributions made the difference!

In a few weeks we will have a great series on the Mekong map.

One reply on “Extreme flooding in the Mekong Basin”