The further south we get, the weirder the Colorado River and its accompanying lakes seem to get. Take Lake Havasu City. According to the city’s very knowledgeable water manager Doyle Wilson, this is `the hottest city in the western hemisphere (128 degrees Fahrenheit in 1994, or 53 degrees Celsius!). Today it’s only 113 degrees, or 45 degrees, by the way.
Some other superlatives: Havasu City was nr. 2 on the list of favorite spring break destinations in the nineties, according to MTV, and according to Mr. Wilson, the city is also a long-time favorite location of the Californian porn industry, because of its exotic and isolated setting. 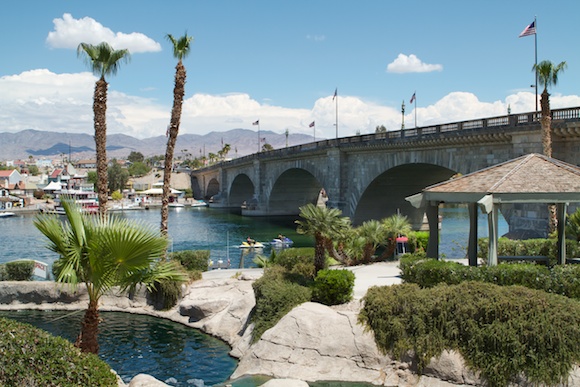 So what’s so exotic here? Well, what do you think of a city that didn’t exist at all 50 years ago, which by now has almost 60.000 inhabitants, which should grow to 100.000 people, which lies in the middle of the desert, along the artificial Lake Havasu, created by the deepest dam in the world (the Parker Dam), built around the London bridge, a stone bridge that was completely taken apart in the UK and then rebuilt in the Arizona desert? Only after the bridge was built, the city fathers had a canal dug under it.
All this water engineering has of course a price. `There’s nothing natural about the Colorado river anymore`, says Doyle Wilson in his office in the city hall. He’s right about that. Invasive fish, dead fish, invasive mussels, too many algae, a high salinity level, worrying pharmaceutical levels, over-using of water, and the threat of a water shortage in the near future all make Lake Havasu City a place where people seem to dance on the top of a volcano.
But hey, this is America. The palm trees are still green. The pensioners still come. The speedboats still roar over the lake. The water is still crystal-clear blue, and the unwanted invasive Quagga mussels make it even clearer. And the air conditioners: they still run. So: let’s have fun!

Spring break location Lake Havasu City is the setting of the horror movie Piranha 3D that was released in 2010.