Weird, weirder, weirdest – the Salton Sea in the south of California, just two hours from Los Angeles, is a place incomparable to anywhere else in the world. Located at an altitude of 40 meters below sea level, in August this place lies in the sweltering, humid heat and is waiting for the first monsoon rains, as even the Californians call it.

Pink Marina in Bombay Beach on the east coast of the Salton Sea. It’s probably caused by bacteria that love the hot water.

This year however, the rains don’t seem to come, tells Stephen Johnson, the 48-year old owner of one of the two bars left at Bombay Beach, a community of 300 permanent residents, and several hundreds of temporary visitors in the rest of the year, when the heat is not so forbidding. `We used to have five bars`, says Johnson in his Ski Inn, while outside it is 43 degrees. `We used to have thousands of visitors. The rich and famous from LA used to come out here.`
It seems that everything used to be better here. `This place is dying`, he says. He seems to be right: Bombay Beach now is mainly a collection of abandoned trailers, rusting cars and dead palm trees, people on social welfare and newcomers who want to be left on their own.
The reason for the misery: the water level of the Salton Sea, which was formed unintentionally in 1905, after a dam broke and the Colorado river filled this Californian sink hole, is slowly receding. Also, the water has become too salty, which causes millions of Tilapia fish to die each year. The shores of the lake are covered which heaps of stinking dead fish. `This country spent tens of millions of dollars on studies to restore the lake, but nothing was done`, says Johnson. `People are frustrated`. 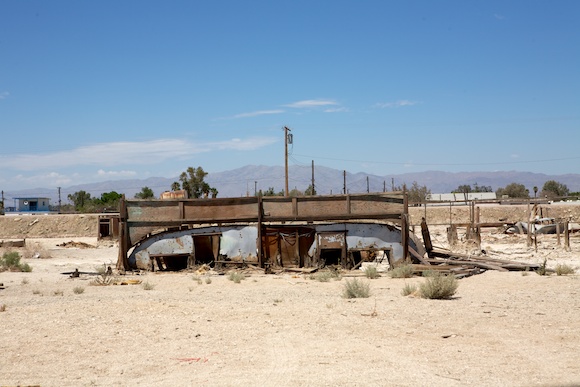 Across the water, on the west side of the lake, in Salton City, Leo `Sonny` Schultz agrees that so far many plans were made, but nothing was done to save the Salton Sea. But unlike Johnson, he foresees a bright future for the area. Of course, as a real-estate agent, he has to sell a good story. `Foreclosures`, says a giant banner outside his office.
Salton City got a grand lay-out in the fifties, for more than 50.000 inhabitants. By now, there are about 6200. But the economic crisis is almost over, according to Schultz. `This is a great place to live. People move here because it’s quiet and because it’s cheap. During the last boom, in 2005, more than 1600 houses were built. After that, many people had to sell their houses because of the crisis, so now is a really good time to buy. You can make a good profit here. People come here for off-road crossing in the dunes.”
According to Schultz, there’s only one reason you shouldn’t come. Schultz: `Don’t come here for the lake. Yes, it’s there, and you can go on it in a boat. But the lake is slowly disappearing. There have been many plans. And there will always be hope. But I think the Salton Sea will disappear. It won’t come back.”