Why do people want to live in Grand Junction? ‘They come here to die’, says our waitress Jenny with a wry smile, while she serves steaks and beer. Jenny works at Applebee’s, one of the dozens of fast-food and steak restaurants in Grand Junction, a roadside town of roughly 100.000 inhabitants.Grand Junction lies just West of the Rockies, and the place looks like it sounds. This is where the wild wild west starts. Jenny just moved to Grand Junction from Detroit and she doesn’t seem to be too happy about it. Still, with the economic crisis going on in the US, people move where the jobs are, and some of them are here. 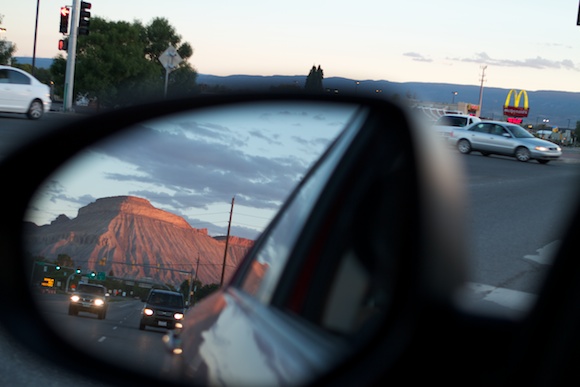 People do not only move here for work, but also for the climate, for the outdoor life or for the adventure of the west. One of the people living here is Bob Burdick, working for the US Fisheries and Wildlife Service. Dressed in khaki shorts and shirt, Bob looks like a real western biologist. He takes us to one of the fish ladders his agency constructed at Redlands along the Gunnison river, just a few miles up from the confluence with the Colorado. 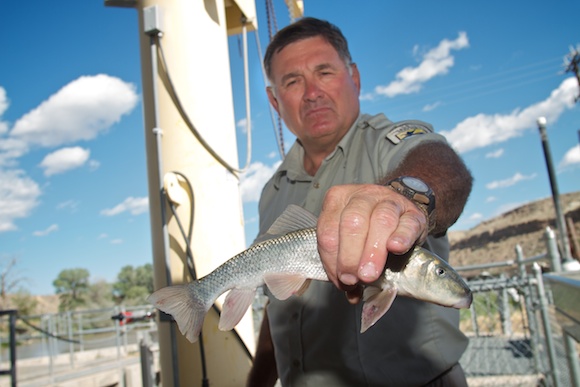 Bob Burdick of the Fish and Wildlife Service in Grand Junction.

Bob shows us some of the non-native fish that invade the rivers in the Colorado river basin and which he is trying stop, in order to protect four endangered species in the Colorado: the Razorback Sucker, the Humpback Chub, the Colorado Pikeminnow and the Bonytail. `Some people think our work is a waste of money’, he says. `Still, most people see the need.’

Bob throws some of the non-native fish he just selected over the fence. `Raccoons will eat them`, he says. Even in the west of the USA, not everybody is welcome.