Little is left of the Jordan River. Most of the water is diverted for irrigating farmlands and supplying cities. Few rivers have spawned conflict like the Jordan River has. Years of below average rainfall forced the bordering countries to search for alternative sources. The ultimate project is a proposed conveyance system between the Red Sea and Dead Sea. ‘It is the only major project in which Israel, the Palestine Authorities and Jordan cooperate.’

The distinct stench in the bathroom is something his renters just have to take for granted. ‘And they need to flush their pooh and pee by using this little black bucket’, shows a proud Ramsey Tesdell, while scooping some water from a large tank dominating the bathroom of his apartment block in downtown Amman. He empties the bucket in the toilet. Bending over the tank, the source of the stench reveals itself. The water has a grey-white colour, and some brownish foam sticks to the walls of the barrel. ‘See, this hose funnels water from the washing machine into the tank’, Tesdell explains, pointing out the hose winding diagonally through the small room. ‘It is just a simple way of saving some water.’ 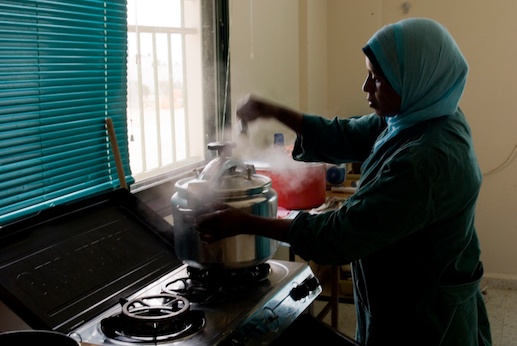 Clean water to cook is a precious resource in the Jordan Valley.

The smell in Tesdell’s bathroom is nothing compared to the piercing stench dominating the restrooms at the ministery of Water and Irrigation of Jordan, the fourth water poorest country in the world. Flushing tanks are missing here as well But Saad Abu Hammour is certainly not the person to ask about missing flush tanks. The state secretary of Water and Irrigation sports a crusty air, and does not smile once during our hour-long conversation. ‘Jordan has always been an arid country’, he says after lighting a cigarette. ‘The amount of available water has not changed, but the population has doubled over the past half century and is still growing. Consumption increases at an even rate. Jordan’s current water supply is around 500 million cubic meters a year, while annual demand is about 800 million cubic meters.’

Neighboring Israel and the Palestinian Territories have also hit their limits. The past ten years have been a particular challenge. Sustained below average in rainfall has resulted in depleted aquifers and forced farmers to leave land idle. Throughout history the countries and communities in the Levant have been hassling, disputing, and fighting over the little water available. The 251 km long Jordan River originating in Lebanon and terminating in the Dead Sea is the main fresh water source in the region, and the main cause of quarrels.

Aside from bloodshed, the increasing consumption of fresh water has resulted in an ecological drama. ‘Watch where you walk, follow me closely’, warns Gundi Shachal, while she zigzags from Route 90 to the shoreline of the Dead Sea. A half kilometre no-man’s-land of pebbles and salt deposits separates the road from the bank of earth’s lowest lake. Reflecting sunlight has a blinding effect. ‘The road used to border the shoreline’, says Gundi, a thirty year resident of kibbutz Ein Gedi. ‘Nowadays the bank is over 1 km wide at some locations.’ The wide bank reflects the drop in water level resulting from the decreased Jordan volume. Over the past hundred years the Jordan volume decreased by some 90 %. More water evaporates than fresh water is supplied. 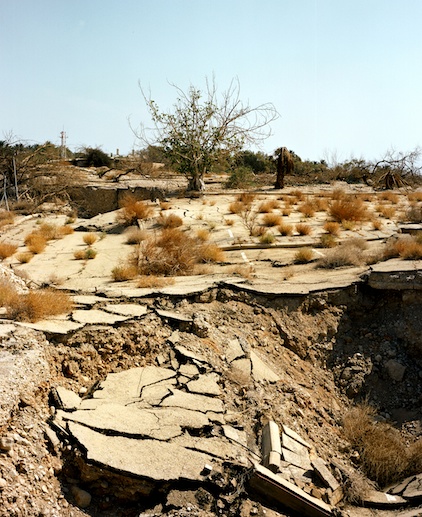 ‘It was and still is a water crisis’, claims Oded Fixler, director general of the Water Authority of Israel, a government body created to tackle the country’s continuing water problems. ‘Although this year Israel received more rain than expected, precipitation is still only 90 % of average. The country remains in a situation of emergency.’

Israel has responded to the recent drought with a more structural strategy designed to give it a fresh water supply independent of precipitation and international quarrels. Three new desalination plants on the Mediterranean shore are already running and another three are planned. The six desalination plants will not fix all problems. It will take years or even decades to replenish the aquifers. ‘Lake Kinneret and the Mountain Aquifer (the country’s main underground body of fresh water, ed.) are about 1,5 billion cubic meters short of their average capacity’, explains Fixler. ‘It will take time to refill.’ If they are at all replenished; normally all available water is being consumed, with hardly any fed to the aquifers.

Most of the Mountain Aqueduct is situated in the West Bank, which is partly under Palestinian control. Almost 60 % of the West Bank, however, is designated Area C, a legacy of the 1993 Oslo Accords designed to pave the way for an independent Palestinian State. Area C, comprising the settlements but also the fertile banks of the Jordan River, is still under full Israeli control. ‘But even when I want to develop a new water well in Area A (the district controlled by the Palestinian Authority, ed.) I need to file for permission with the Joint Water Committee. It takes years before a project receives approval’, says a frustrated Shaddad Attili, minister of Water to the Palestinian Authority sitting in his Ramallah office where Mahmoud Abbas shares the wall with two slightly yellowed photographs of Yasser Arafat. ‘How can I get my people water, if I only have my two hands to work with?’, he asks angrily. ‘I am the minister of no water.’

After a two-hour drive from Ramallah, Harbi Abadallah welcomes me in a tent made of black plastic. The make shift construction provides shade to a group of farmers from Jiftlik, a small Palestinian community located in the Jordan Valley. ‘Jiftlik counts 25 wells, that predate the Six-Day War of 1967’, explains Abdallah, who heads the Jiftlik Farmers’ Union and Agricultural Cooperative. ‘Five wells are out of order because of technical issues. Contributing to the shortage is the drop in production from the remaining wells. On average each well used to pump some 100 cubic meters of water per day. Production has halved with the twenty wells together currently producing merely 1000 cubic meters daily.’

Surprisingly, Pellaâs wells are located in the middle of some spectacular ancient roman ruins. With political mismanagement, 40% of the network leaking and thousands of illegal wells, water access in Jordan is just stress and confusion.

Depletion of the Mountain Aquifer, the large ground water body shared by Palestinians and Israelis, is the main cause for the production drop from the Jiftlik wells. The old holes run only 60 to 100 m deep. Depletion of the reservoir requires deeper wells to obtain significant production levels. ‘Israeli wells reach 1000 m deep maintaining high production rates, while depleting the Mountain Aquifer’, says Abdallah. ‘Our wells run dry as a result. This is Area C; we are not allowed to drill new wells.’

Jordan, the Palestine Authorities, and Israel show little interest in cooperatively creating water policy. There is however one large water project, in which the three countries have joined forces. Plans for the construction of an almost 200 km long conveyance system between the Red Sea and the Dead Sea are back on the table. Pipelines will siphon water from the Red Sea to the Dead Sea, where hydropower and desalination plants will use the 400 m drop in elevation to produce power and fresh water. The resulting brine will be released in the Red Sea with the intention of stabilizing the water level, while most of the potable water is destined for thirsty Amman and the West Bank. A feasibility study managed by the World Bank and led by the French engineering firm Coyne et Bellier is due for release this fall.

‘The political will is there. Two days after the 2009 Gaza war the three parties were back at the table’, says Alexander McPhail, project leader at the World Bank. ‘It is the only major project where the three countries are publicly working together.’ But the 6 billion euro price tag sharply contrasts with Palestinian farmers’ poor living conditions and Jordan’s feeble economy. ‘And who will control the assets, who will push the buttons?’, asks McPhail.

Back in Ramallah, Palestinian water minister Shaddad Attili speaks sceptically of the proposed conveyance system. ‘Even if the project was implemented, which I sincerely hope for, it will take at least another decade before additional fresh water arrives. What are we going to drink in the mean time?’ Equally sombre state secretary of Water and Irrigation Saad Abu Hammour remains confident that Jordan will tackle its water challenge. ‘The country just needs a pipeline between the Red Sea and the Dead Sea, otherwise we run into trouble. If the joint project fails, Jordan will unilaterally proceed with a similar scheme. We need the water.’