Millions and millions of small farmers establish the backbone of Egypt`s farming sector. Only a few dozen of large agricultural companies produce on a professional level that is comparable to European standards. According to some people, the future of Egypt`s agriculture lies in the desert. Others disagree. All agree, though, on one aspect: water for agriculture is scarce. And it is getting scarcer.

Imagine Egypt and most people visualise lush, green fields, accompanied by the occasional palm tree along the river Nile. Although this is indeed part of the picture, it blurs the fact that more than 90% of Egypt consists of pure, dry, dusty desert. The few percent of arable land in Egypt are to be found along the Nile. Small farmers have been working the fertile soils along this longest river in the world since ancient times.

The typical Egyptian farmer is a traditional family man, working the land that he inherited from his father with his four or five children. Usually he does not own more than an acre of land. Besides that, he has one or two cows or buffalos, for milk for own consumption and a few sheep or goats. He irrigates his land with Nile water, which he often taps off the irrigation canals illegally. Egyptian law enforcement is not strong enough to suppress this illegal irrigation. Life is hard for the small farmer, it`s not easy to survive. He worries about the future: his sons will need land for themselves and their families, but all agricultural land is already used, there´s no more space.

One of these ´typical´ Egyptian farmers is Abdel Geber Regab. He is 42, but he looks at least ten years older. He lives in Beni Ahmed, a village along the Nile, three hours south of Cairo. The houses in the village are built of bricks and mud. In some of the houses, the farmers keep their livestock in a room under the same roof as where they are living. It almost never rains in Beni Ahmed. For some of the inhabitants, drinking water comes from wells, which deliver water with a mediocre quality. The streets in Beni Ahmed are unpaved and littered with garbage. Old bottles, plastic bags and pieces of cloth are lying around everywhere. Most people walk, they do not own a car. Everywhere you look, you see children, some of them barefoot. The Egyptian population is extremely young. 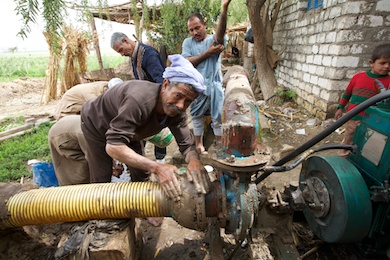 Fixing the pump that has to irrigate the land of Mr. Regab.

Life is hard in Beni Ahmed, and working the land is even harder, according to Mr. Regab. ‘Of course my back hurts! Every farmer has problems with his back, but we are used to it. We have been farmers since Pharaonic times.’ Regab works his land by hand, together with his three sons and some other family members. A few times per year, he rents a tractor for ploughing work.

Regab, a proud man dressed with a head scarf and djellaba, produces eggplant, wheat and lucerne (a kind of alfalfa). The eggplants and wheat he sells at the market in nearby city El Minya, the lucerne he uses as fodder for his two buffalos. `I would like to have more land, but it’s too expensive. I own half a feddan (acre), and I rent another half feddan from a rich landowner. I pay about 1000 Egyptian pounds (roughly 120 Euro – JK) for it per year, which is really a lot of money for me.’

His rented land borders the river Nile, but Mr. Regab is not allowed to use this water. `I have to pump up my water from a well, about thirty meters deep.’ He takes us to an old diesel driven water pump, with which he floods his land each week. Mr. Regab and his family men around him try to start up the old diesel pump, which takes a lot of effort. `I cannot afford a new pump, that would cost at least 6.000 Pounds (roughly 800 Euro, JK). The irrigation itself is expensive too: `It costs me 15 liters of diesel each time I irrigate.’

Even if Mr. Regab would have more money to buy land, there’s nothing available. On both sides of the narrow strip of fertile land along the Nile, there’s the desert where farming is impossible. What will happen with his three sons? Will they take over his farm when he’s old? Mr. Regab looks aside to his son Ahmed, 19 years old, dressed in a djellaba, smiling friendly, saying nothing. ´I hope he will take over. I hope there will be enough land for my sons. Insha´allah.’

In order to solve the issue of a shortage of agricultural land, the Egyptian governement has developed plans to move people out of the Nile valley into cities and to new agricultural development areas in the desert. One of these new desert cities is located just opposite of the village of Mr. Regab, on the other bank of the Nile. About half an hours´ drive from his village Beni Ahmed, one can find New Minya, a sattelite city to El Minya, which is a regional capital along the Nile with roughly one million inhabitants. New Minya was developed during the last decade. Hundreds and hundreds of apartment blocks, supermarkets and half-ready streets are waiting in the desert sand to be filled with life. Here and there, people have moved in, but many apartments are still empty after years. `People don`t like to live here`, tells Vivian Samir Mikhaid, a resident from El Minya who`s parents bought a second home in New Minya. `The new city is far from anywhere. It`s unattractive to live here.`

Still, according to some scientists and politicians, the future of agriculture is in the desert.  A few hundred kilometres further north, along the road between Cairo and Ismailia, Susanne Basilios Farag, one of the owners of the Mirhom Farag Farm, tries to explain why she agrees with this concept. Normally it would be easy to understand her, but not today, since the nearby muezzin is calling for prayer. `I don`t go to the mosque`, says Mrs. Farag. `I´m a Christian Copt. I wish they would do their calls for prayer a bit less loud.` 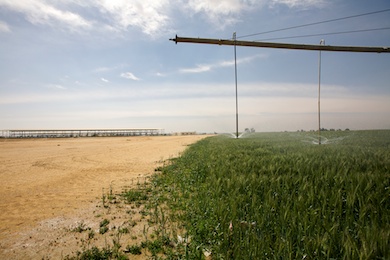 Mrs. Farag and her two sons own a farm with 2.000 cows for milk and meat produce. Furthermore, they rent seven so-called pivots: huge circular fields, each 150 acres big. The pivots are located in the desert and used for the production of corn and grains. The desert soils are irrigated by huge, turning sprinkler installations with a diameter of 850 metres.

Mrs. Farag takes us out to the fields, along the desert road to Ismailia. Gigantic, green circles of land appear in the desert road. The wheat on the fields is doing well. `Grains and corn grow fast here. We feed the desert soil with nitrates and Nile water, that is pumped here from the nearby Nile through an underground irrigation system. From there, the sprinklers take the water to the land. Desert agriculture is quite reliable. Some of the main problems are too low or too high temperatures and sand storms, which might damage the harvest. Otherwise, our harvests are quite predicable. In a few weeks’ time, we will harvest the wheat. After that, corn will follow, the summer crop of choice.´

The next day, Dr. Osama Khairy Saleh, a consultant to the Egyptian Ministry of Water and Irrigation, agrees that there are big opportunities for agriculture in the desert. `This is not only the case in Egypt, but it goes for Sudan as well. I am advising several Saoudi princes who are investing in agricultural development projects in Southern Egypt and Northern Sudan. Saoudi Arabia wants to expand its access to agricultural land, in order to be able to feed its population independently.´ Dr. Saleh sees no problem in this: `As long as the agricultural areas are not used for mere speculation but for real food production, it is alright.´

It is also possible to attract farmers from other parts of Egypt to the new development areas, according to Mr. Saleh. `We can move farmers to areas such as Toshka in the desert in the south of the country, but then there is still a lot to do. In some cases, Nile valley farmers who were relocated to desert farming areas returned to their old homes, because they did not receive sufficient training. There was no infrastructure or help, so after some time many of these farmers decided to move back. This is avoidable, but we will have to invest in the farmers. In the case of Toshka, the region has been appointed for the development of hundreds of thousands of acres of agricultural land. So far, only a few thousand of acres of land have been taking into production. One of the main problems is the missing infrastructure; all vegetables have to be flown out. We will first have to solve such issues.`

Before small farmers such as Mr. Regab from Beni Ahmed will move to desert farming areas such as Toshka in the middle of nowhere, a lot of water still has to flow through the Nile. Mr. Regab, has other, more concrete worries. `From where do I get the money to pay for the diesel for my water pump?`