The Egyptian Nile delta is one of the most fertile areas in the world. Therefore it is no wonder that this region has been used for intensive farming for decades. Although the Nile delivers a constant flow of fresh water, farmers will have to improve the rate of efficiency of their irrigation.

It`s busy in the entrance hall and on the stairs of the General Directorate for Irrigation Improvement in the city of Damanhour, about 60 kilometers south of Alexandria, in the Nile delta. Dozens of farmers are flocking the floors of the irrigation building. They hope to meet with one of the employees in person, in order to discuss their water issues. It`s easy to imagine what their problems are: leaking irrigation channels, high prices, or worse: no irrigation water at all.

In order to improve the irrigation of agricultural land in the Nile delta, the Egyptian Ministry of Water and Irrigation started a so-called IIIMP (Integrated Irrigation Improvement Management Project) a few years ago, with the support of Dutch expertise. The project is financed by Dutch, German and Egyptian institutions as well as with World Bank money.

`We are trying to organise farmers in the project area through so-called Branch Canal Water User Organisations (BCWUAs)´, tells Abd El Salam Gaber, while he unfolds a map of the IIIMP region. `Most of the irrigation in the Nile delta functions in an anarchistic, uncontrolled way. Farmers tap water illegally. We are losing a lot of water through leaks. Together with the farmers, we try to restore these leaks.`

Setting up the BCWUAs is not enough. The IIIMP also focuses on developing completely new, under-the-surface irrigation systems, based on new, plastic irrigation pipes. Furthermore, the IIIMP works on the improvement of the mesqa canals: man-made canals all over the delta that are of crucial importance for the irrigation.

One of the main measures, though, taken under the IIIMP, is the construction of several pumping stations. `The stations are managed by the farmers themselves`, tells Mr. Gaber. `Farmers are not only organised on the branch canal level, but also on the mesqa canal level. Here, the farmers elect a responsible person. This man is the only one who has the right to pump water through the canals. All water use is administered. The farmers pay back the pumping stations through a credit system.`

One of more than 100 pumps on the Dina Farm to pump up water for irrigation.

Apart from organizing the farmers on the branch canal and mesqa levels, the Directorate of Irrigation also organizes the farmers in a Water Board. The ultimate goal of the Egyptian Ministry of Water is to set up one Water Board per governorate. Egypt has 40 governorates. A Water Board is responsible for an agricultural area of 50.000 to 80.000 feddan (acre). A Branch Canal WUA focuses on 2.000 to 10.000 feddan, whereas a farmer`s organisation on the mesqa level deals with a few hundred feddan. The IIIMP and associated projects in the delta aim to improve irrigation in an agricultural area totaling more than 300.000 feddan.

Mr. Gaber takes us out to the delta, together with Dr. Osama Khary Saleh, who is a consultant to the Ministry of Water and who works on the IIIMP as well. Part of the way we drive along the Rosetta branch of the Mahmoudia canal (77 kilometers long), built by the British in the 1890ties. This canal takes water directly from the Nile river. A century ago, the canal was used for shipping, but nowadays this does not happen anymore.

The scenery along the roads in the delta feels almost Dutch: flat lands, greens fields, water canals. Only the occasional palm tree reminds us that we are in Egypt. Everywhere, one sees illegal housing construction. `It hurts me to see that precious, fertile agricultural land in the Nile delta is being used for housing`, tells Dr. Saleh. `It is illegal to construct buildings on agricultural land. Houses should be built elsewhere, not in the delta. There should be more law enforcement on that. In order to take pressure from the Nile delta, we should relocate farmers to other areas, where they can do desert farming.`

Along the draining and irrigation canals in the delta, everywhere one can see farmers pumping up the drainage water over the man-made dikes with diesel pumps. In some of the canals, dead cows float around. According to Dr. Saleh, it is unclear whether farmers have dumped their dead animals in the water or whether they fell in by themselves and somehow died there. `The awareness of the Egyptians about the need not to pollute the canals is slowly increasing, but a lot still needs to be done to improve the situation.` Not only individuals pollute water, most of the industrial waste water in Egypt is being sluiced untreated into the Nile.

Everywhere in the delta heaps of weed are lying around, which have been dragged out of the canals. The weed constantly threatens to clog the canals. There is no real solution against it yet, although some fish species tend to eat the weed. Weed growth increased enormously after the Nile was dammed.

In the village of Karioun, Mr. Saleh shows us one of the newly constructed pumping stations. A local farmer, Mr. Said, proudly opens the metal door to the small, new pumping station. The water that is pumped through here to the irrigation canals in the fields comes from the nearby Kanobia canal and the El Wazir mesqa.

The farmers who are organized at the mesqa level, have to pay back the investment of the pumping station and the improved irrigation, explains. Dr. Saleh. `The pumps will be paid back within three years, for the civil works the farmers have twenty years. They are willing to pay off the loans, because they see that their yields improve, their water costs are less and they have to work less on fixing leaks.` The total costs for the irrigation improvement are about 5000 Egyptian pounds (600 Euro, JK) per feddan. Over a period of twenty years, this makes about 250 pounds per year. 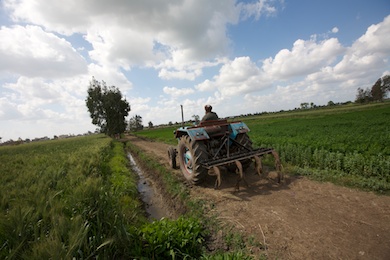 The fertile Nile delta only needs low tech solutions to be the highest yielding agricultural area in the world.

According to Dr. Saleh, many farners used to suffer from a shortage of water. ´Especially farmers at the end of the mesqas were often completely shut off from the water flow. This has changed now. With the help of the pumps and the improved irrigation canals, the water reaches the end of the irrigation canal. Now there is equity between the head and the tail.`

From the pumping station, Dr. Saleh and Mr. Gaber lead us into the fields, over a small farmers´ road that was constructed exactly at the location where there used to be a small marwa canal. The marwa is a traditional irrigation ditch of roughly 40 centimetres wide. The green surrounding fields are covered with sweeping grain and alfalfa. A buffalo and sheep turn their heads as we walk by. Further down the path, local farmer Abdullah is harvesting alfalfa for his cows. He does it by hand, with a sickle. `I harvest alfalfa about six times per year`, he tells. `I only own half a feddan of land, it`s not enough for me to live from. So occasionally I also work for other farmers in the area.´

The alfalfa of Abdullah has a healthy, deep green colour. He`s happy with the new pumping station, but Abdullah still has one wish: `I would like the irrigation water to flow all day long.´ Dr. Saleh has to laugh about Abdullah`s wish. `Of course that would be great, but it`s impossible`, says Saleh. `Even with the improved irrigation efficiency, we cannot deliver that much water.`