The Colorado river is not only threatened by climate change and over-use of the river water. A major threat comes from an enormous radioactive mining-waste pit. This waste, or ‘tailings’ site is located on the bank of the Colorado River, in Moab, Utah, a small town that turned into the uranium capital of the world in the 1950`s. Set in some of the most spectacular desert landscape, just outside the adventure-seekers´ town of Moab, the US Department of Energy (DOE) manages a giant tailings pit where over the past decades millions and millions of cubic metres of all kinds of contaminated mining residue was dropped, in the open air, just next to the river. Radium, arsenic, lead, mercury, uranium, ammonia: you name it and you can find it at the Moab site. By 1984, the 16-million-ton pile of toxic nightmares had risen 40 metres high. By then, the Moabians started complaining about the radioactive dust that blew across town on windy days. For years, contaminated water had run off the site in the direction of the Colorado, directly threatening the river water with radioactive pollution.

In order to stop this threat, the US Government decided to invest billions of Dollars to clean up the tailings, by dismantling the whole waste site. “We`re taking the mine tailings from Moab by special trains to a location in the Grand Junction area, about 30 miles further to the north”, tells Kirk Riscoe, the site mananger of the Moab waste pile, while we`re standing in the desert heat along railroad tracks on a hill overlooking the giant waste site. “The material is brought to its new location by special trains. About 300 people work on the site. The job should be finished by 2028.”

Before transporting the mining left-overs, the waste material is first moved to evaporation ponds. Riscoe: “The waste consists of very fine-grained slurry, which is still wet after having been covered up fourty years ago. By putting it into the ponds, the water can evaporate, so only the polluted residue remains. This makes transport easier.” According to Riscoe, the material is then taken to a unique geological location. “We`re taking it to an uninhabitated area where we found a shale formation of 3000 feet thick. There`s no groundwater there, so nothing can leak away. We deposit the materials and at the end cover them up with a layer of sand and clay.” 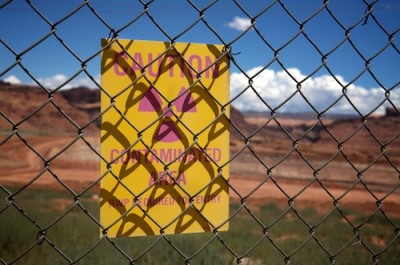 According to Riscoe, there`s no comparable waste location like this one in the USA. “We used to have a similar location close to Grand Junction. People used the radioactive soil to construct roads and foundations of residential homes. They weren`t aware of the health threat of the nuclear waste at that time. Therefore, we had to tear down some of the buildings in order to take the radioactive tailings away. Of course, there are always some people who think what we are doing is silly, but we really have to dispose of the waste in a responsible way.”

In about twenty years, the tailings site along the Colorado should be history. But new threats are appearing. Riscoe: “Recently, uranium prices have gone up enormously on the world market. About twenty miles further south, in Lisbon Valley, they’re planning to re-open a uranium mine.”