The Colorado river is fed by melting snow water from the peaks of the Rocky Mountains. One of its many tributaries, the Gunnison river, has its source near Crested Butte, a pristine mountain resort high in the Rockies, close to the well-known ski resort Aspen. Crested Butte is located at 2600 metres (almost 8000 feet) altitude, and seems to be a place for the happy few. On a bright Sunday morning in August, happy families stroll along colourful wooden houses in this former silver mining town. ‘Be careful with your waste, it’s bear season’! says a sign in one of the shop windows. At Camp 4, people park their bicycles along the road and queue up for fresh coffee. On the main street, people on outdoor sandals stroll along the organic food market.

‘The inhabitants of Crested Butte are quite aware of environmental issues and the need to protect our rivers’, tells Steve Glazer a few moments later, after he has introduced himself in front of the wooden town hall. Glazer is the President of the High Country Citizens` Alliance in Crested Butte, a coalition of local NGOs fighting the plans of some companies to restart silver and coal mining in the mountains above the town. ‘Around 1860, coal and silver mining started here, but the mines have been closed and the sites have been cleaned up for years now. Because of high prices on the world markets, some potential investors have been asking about the possibilities to restart mining. But renewed mining would cause enormous damage and pollution to the Gunnison river and in consequence to the Colorado as well’, explains Glazer. ‘Mining is not a sustainable industry for our town. We would see a boom economy for some years and then it would all be finished again, after having polluted the river water. Mining doesn’t fit into the character of Crested Butte either. We’re focused on tourism and outdoor sports. Further down the valley, people depend on agriculture. We do not need mining here. Luckily, so far we have managed to keep the miners out since we started in 1977. We did this by raising the awareness of the local population for the need to protect our rivers. Therefore, investors did not manage to get sufficient local political support for their plans.’ 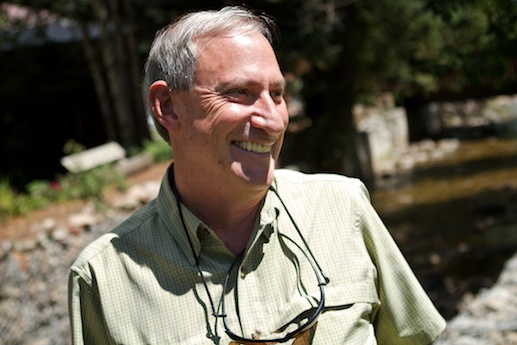 Glazer is not only worried about the local Gunnison river, but about the future of the whole Colorado water system in general. ‘The big drought in the west of the US began in 2002. In that year, only one quarter of the average precipitation came down in the Colorado river basin. For many Americans in the West, this functioned as a sort of wake-up call. People became more aware of the water problems. Last winter we also had very little snowfall. If nothing changes, things will get out of control. Year after year, we are using more water than we receive. We can only do so by using up the stored water capacity in the great lakes behind the Powell and Mead dams, but at a certain moment that water will be gone as well, and this moment is approaching at high speed.’