“This place was thriving back in the 60 and 70s; nothing but people; people walking their dogs, watching their kids playing. It was a nice community at the time.” Lawrence Parker (60) remembers those days with nostalgia when he stares across the rusty fence that separates him from the calm lake. His electric wheelchair almost gets stuck in the cracked asphalt of Salton Sea Beach, a small community of crumbling wooden houses, rotting trailers and boarded up restaurants and motels.

Parker came in 1974 to Salton Sea Beach, then a young and aspiring town on the coast of the Salton Sea. He came for the climate that is beneficial to his arthritis. 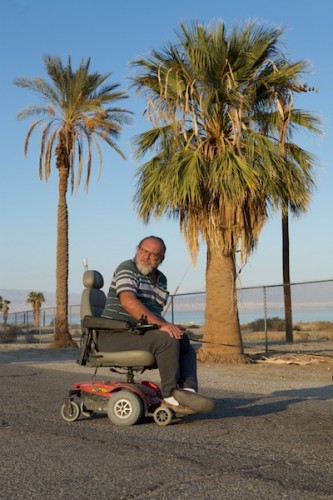 “They called it the Californian Riviera. Many people bought a piece of land and built holiday homes. It was cheap out here, but the land prices were rising fast.”

In those years the area boomed. It became a hangout for the rich and famous from Hollywood and Palm Springs. But at the end of the eighties the tide turned, literally. The water level suddenly rose, flooding whole neighbourhoods. Massive fish die-offs that created a pungent smell, and rumours of pesticide pollution scared away the tourists. The boom was over as quickly as it had begun. Only those who couldn’t afford to leave, like Parker, remained.

The Salton Sea, the largest lake of California is, at 70m below sea level, the second lowest place in the USA. It shouldn’t even have been there. It was accidentally created a century ago when a levee of an irrigation canal, supplying the Imperial Valley (on the south shore) burst. The low-lying valley filled up and after the canal was fixed, the runoff of the agricultural lands sustained the water level.

Farmers and local authorities have always treated the Salton Sea as the drain of Imperial Valley. When the farmers had a water surplus, like in the 80s, they dumped it in the lake, flooding the towns.

In recent years, after ten years of drought, farmers in the Imperial Valley are introducing new water conservation methods like drip irrigation. Instead of benefiting the Salton Sea, the water is sold to thirsty Los Angeles and San Diego.

Lately the water levels in the Sea have dropped with as much as 1 meter a year. Many fear that if nothing is done about it, there won’t be a Salton Sea left in a few decades. This will cause new problems. Palm Springs, 35 miles north, fears dust storms of pesticide-polluted salt particles. Environmentalists fear for the millions of migratory birds for whom this is the last remaining wetland in California.

So far, all initiatives to save the sea have failed. The Salton Sea is a perfect example of the choices that are made when the water runs out. The big cities, the massive agricultural lands and even the golf courses of Phoenix, AZ come first. Nature is at the end of the line, or as Lawrence Parker describes it: ‘Water flows to where the money is.’