Laos appears to have defied its neighbors in a move to resume preparations for the proposed Xayaburi Dam on the Mekong Mainstream, despite concerns raised by neighboring governments and regional civil society groups. A letter leaked to environmental NGO International Rivers, dated June 8, 2011, reveals that the Lao Government has informed the Xayaburi project developer Ch. Karnchang that the Mekong River Commission’s (MRC) regional decision-making process is now complete, presumably giving Ch. Karnchang the green light to proceed with the project. 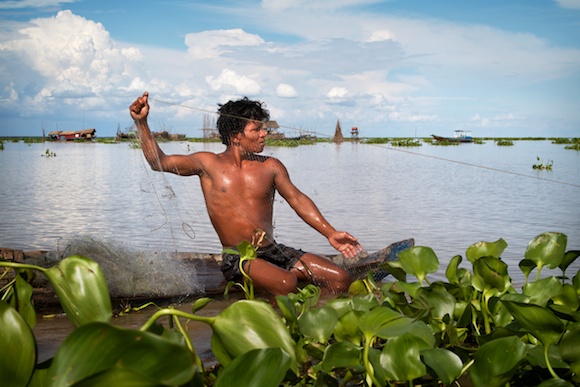 The nets of small fishermen on the Tonle Sap Lake in Cambodia remain empty. China is accused of causing receding fish levels by building dams in the upper stream of the Mekong River.

The MRC itself, however, is yet to officially announce the regional process as complete. Previously, at a Special Joint Committee Meeting on April 19, the four member governments agreed to defer the decision on the project to a Ministerial level meeting, likely to take place in October or November 2011. At this Special Joint Committee meeting, whilst Laos proposed to proceed with the dam, Thailand, Cambodia and Vietnam called for an extension to the decision-making process citing concerns about transboundary impacts and knowledge gaps requiring further study and consultation.  Vietnam also recommended that the decision on the Xayaburi Dam and other proposed mainstream dams be deferred for a period of ten years.

This is very worrying for the fishing and agricultural industries in Cambodia and Vietnam. Construction of dams in the main stream of the Mekong River is said to seriously affect the migration of fish up and down the river. The reduced change of water level during the monsoon and dry season will prevent forests on the shores of the Tonle Sap Lake to flood annually. These forests are the nurseries for almost all he fish in the lake, but also the rest of the Mekong River. In the past five years fish levels have already gone down dramatically after the construction of several dams much further upstream in China.

On April 23, at a meeting in Phnom Penh, the Prime Ministers of Vietnam and Cambodia jointly expressed concern about the Xayaburi Dam’s transboundary impacts to fisheries and agriculture. Subsequently, at the 18th ASEAN summit in Jakarta on 7 May 2011, the Lao Prime Minister agreed to a request by Vietnam’s Prime Minister to temporarily suspend the Xayaburi Dam and commission a review of the project’s documents by an international consultancy firm under the framework of the MRC.

Laos’ Ministry of Energy and Mines had publicly confirmed that the study had been commissioned, yet no further details of the study nor the role of the MRC in this process was announced to the public. It now appears that the study was a cursory, one-month review of the PNPCA process and not a review of the environmental and social impacts of the project.

“It’s no surprise that the Pöyry Group was selected to review the Xayaburi Dam given their long history of dodgy deals that have allowed disastrous dams to proceed in the Mekong region,” said Pianporn Deetes, Thailand Campaign Coordinator for International Rivers. “But it’s outrageous that Laos would stoop so low as to place its consultants’ opinions above its neighbors concerns. The extensive scientific evidence that demonstrates the dam’s severe social and environmental impacts should no longer be ignored, and the Xayaburi Dam should be cancelled.”