Egypt and Ethiopia have some of the fastest growing populations in the world. Both countries went from 20 million in the 1950s to 80 million now and 150 million inhabitants in the near future. Almost all these people depend on from the Nile for their surival. The previous Egyptian Water Minister even threatened with a water war, should Ethiopia build a dam in the Nile. The struggle for survival has begun.

Vinay Shekar has a problem. The 28-year old Indian should be working the 11.790 hectares of land in Bako, a remote area in western Ethiopia, which his company, Karuturi PLC has leased from the Ethiopian government. But things are not going as planned. The local cattle farmers have started a revolt against Karuturi. “They don´t want to leave our lands which they use for cattle grazing”, says the exasperated South Indian. “But the land is ours now. We want to grow rice here.” Shekar wipes the sweat from his face. It`s hot, here in the middle of nowhere. Indeed the Ethiopian government leased the land to the Indian company for 49 years. Further west, along the border with Sudan, Karuturi even leased an incredible 300.000 hectares of land. According to unconfirmed sources, Karuturi pays less than a Dollar per hectare per year.

Since a few years, foreign investors such as Karuturi are invading Ethiopia. The Chinese construct roads; the Dutch grow roses and Indians and Saoudis have invested billions of Dollars in sugar-, corn-, palmoil- and rice plantations. The Ethiopian government leases out millions of hectares of fertile land, mostly in the western part of the country, which is part of the Nile basin. The idea behind the land leasing: increased food production; job creation and development of remote corners of the country.

On the Ethiopian highland plateau at an altitude of roughly 2000 metres, annual monsoon rains form lake Tana, which is seen as the source of the Blue Nile. This river joins the White Nile in the Sudanese capital Khartoum. But just before the Sudanese border on a remote stretch of the Blue Nile deep in the Ethiopian jungle one of the most controversial developments in Eastern Africa is proceeding steadily:  the building of Ethiopia`s Grand Renaissance Dam. It will be the largest hydropower plant in Africa when completed.

“We need hydropower”, says Tsegaye Abebe, a member of the National Committee for the Grand Renaissance Dam. Ethiopia suffers from frequent electricity blackouts and badly needs the income generated by the export of electricity. The construction of the dam should be completed in 2016, according to Abebe. Egypt and Sudan fiercely oppose the dam. Their argumentation: according to Nile Treaties from 1929 and 1959, Egypt and Sudan are entitled to receive 80% of all Nile water. With their exploding populations and their economies growing, both downstream countries experience an ever-increasing demand for water, and fear that Ethiopia will take it away from them. 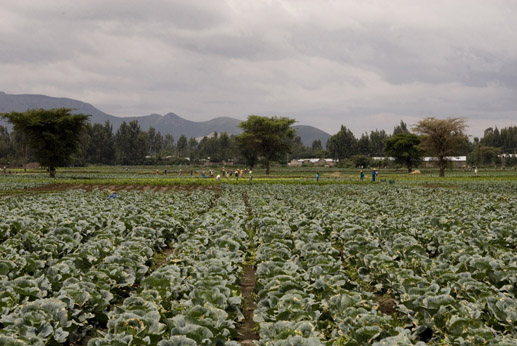 Development of agriculture can improve the lives of many in Ethiopia. (Photo: Célia Pernot)

Thousands of kilometres further downstream, close to the Egyptian capital of Cairo, Mohammed Waeer remembers the first days of his DINA farm, which is located in the desert between Cairo and Alexandria. “When we started here, we lived in tents”, recalls Waeer with a melancholic look in his eyes. “And these early days are only twenty years ago,” he continues. But since then, the desert between Cairo and Alexandria has seen dramatic changes. After the road was expanded into a four-lane highway, residential complexes sprung up, industry soared and even agriculture took over vast tracts of desert. And all depend on precious Nile water. In twenty years, DINA has grown to be one of the largest farms in the Middle East, with more than 7.000 milking cows and 10.000 acres of land, irrigated by gigantic sprinkler installations. DINA farm produces potatoes, fruits, vegetables and dairy products for the domestic market as well as for export. Waeer believes agriculture in the Egyptian desert makes sense. “The traditional farming areas in the Nile valley and delta are full. All the land is used. There`s no space left there, so the only place to go is to the desert.”

Back in Cairo, Mr Boissevain, a Dutch water consultant at the Egyptian Ministry of Water is sceptical. “Farms along the Desert Road have serious problems with water shortages. They have been waiting for Nile water for decades. But the canals that are supposed to supply their farms have yet to be constructed and there might not even be sufficient water for all. In anticipation they have been pumping fossil water from desert aquifers that may be depleted in the near future. Desert farming in Egypt is at its limits. We cannot expand agriculture endlessly.”

According to Boissevain, Egypt should focus on more efficient water use in agriculture. “Egypt is already under the UN norm of water availability per person: each Egyptian has access to 750 litres of water per year, whereas the minimum according to UN standards should be 1000 litres. Much water is lost through inefficient irrigation and leaking pipes. We have to address this first. There are many alternatives like sprinklers, drip irrigation, etc. We have to improve the system.” 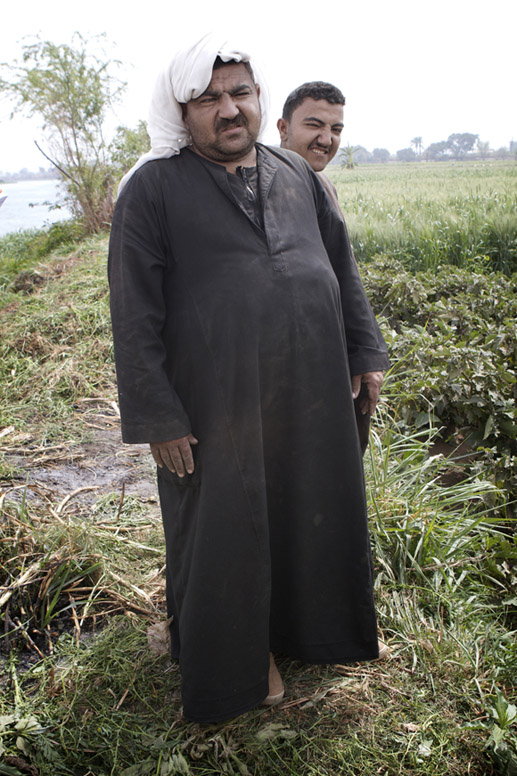 Abdel Geber Regab and his son on the low dyke that separates their field from the Nile. (Photo: Ronald de Hommel).

Meanwhile, in Beni Ahmed, a small village on the bank of the Nile several hours south of Cairo, Abdel Geber Regab, a 42-year old farmer toils on his small field with eggplants. Mr Regab wonders each day how to pay for the diesel to pump up water from a 30 metre-deep well, in order to irrigate his land. He looks at the fast flowing Nile water, just a few meters from his field. “My land lies directly along the Nile”, he sighs, “But I am not allowed to use its water because it is strictly regulated. So I have to pump up ground water. But since the revolution early this year, everything has become so expensive.”  Regab hopes that when he retires, he can hand over his farm to his three sons. “Unfortunately they will need to share it, because there is no more land available around here. All fertile soils in the Nile valley are in use already. The rest is just desert. My sons will have to survive with the land and the water that I have now. I hope it will be sufficient for them. Insha´allah.”