`Welcome to the hottest city in the western hemisphere`, says Doyle Wilson, the water manager of Lake Havasu City, in the airconditioned city hall of his home town. It`s August, it`s 9 am, and it`s already soaring hot. `In 1994 we had a record temperature of 128 degrees Fahrenheit, which makes 53 degrees Celsius`, Wilson tells proudly, while we’re walking to his office. Record temperatures or not: people keep on coming to Lake Havasu, a retirees´ water paradise in the US state of Arizona, about a three hours´ drive south of Las Vegas. `We get more and more snowbirds, that`s how we call the retired persons. Many of them fly in through Las Vegas from Canada`, says Wilson.

Summertime is really too hot to be in Lake Havasu City, but from September to May, temperatures are perfect. During most of the year, the 60.000-or-so residents of Lake Havasu City enjoy the crystal clear blue waters of Lake Havasu, a lake in the desert. `Just outside town you’ll see the Parker dam, which is the deepest dam in the world`, tells Wilson. `The dam keeps the Colorado river water at the same level year round to provide the two big canals that supply Phoenix and Los Angeles with Colorado water.’ The desert setting does not only attract retired persons; during the famous spring break holidays, thousands of students flood the desert paradise to party until they drop. And there`s even another industry interested in Lake Havasu: the Californian porn industry, according to Wilson. ‘They like the climate and the exotic setting of the place.’ 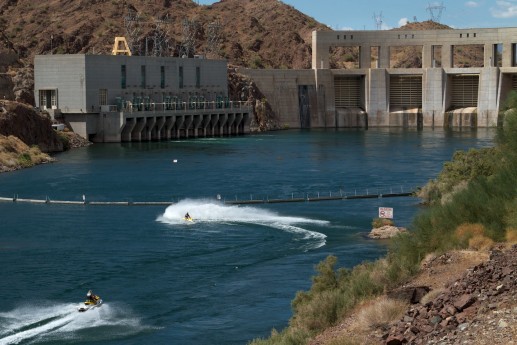 Although Lake Havasu City may look like paradise at first glance, the city has its own share of problems, especially connected to water issues. Wilson: ‘We created Lake Havasu by plugging up the Colorado River with the deepest dam in the world. (Deep because it actually continues 72m underground to prevent seepage.) All this river engineering of course has its price. There’s nothing natural about the Colorado River here anymore. We have to deal with invasive fish species and the very rapidly spreading non-native quagga mussels. These mussels eat everything they can and in this way they are extremely efficient filter feeders. Because the mussels eat so much, the water becomes very clear, in a way you could say: too clear. On top of that, they clog up all the pumps and water pipes that supply the city. Other problems are the high levels of pharmaceuticals and salt in the lake water.’

According to Wilson, the inhabitants of Lake Havasu are overusing the water. Wilson: ‘About 60% of all water is used for garden irrigation. Many people irrigate two or three times per day, which is really inefficient. We managed to reduce water consumption per capita over the last years. But at 210 gallons per capita, we’re still amongst the top water consumers in the country. Quite some people in Lake Havasu seem to be not very interested in saving resources. Besides that, water prices are very low. But still, people enjoy our city very much.’