The setting sun paints the sky over Tonle Sap Lake lavender when fisherwoman Mrs. Samnang (32) pulls her net into her small boat with the help of her two children. Metal spray cans of RAID insecticide that they use to keep the net affloat bang against the boat. The catch is poor. “Nowadays we only catch small fish. All the big fish are gone,” she comments with a sad smile on her face. When asked for the reason, she just stares and says: “They say the Chinese have built dams in the river.”

The Tonle Sap Lake in Cambodia provides livelihood for tens of thousands of fishing families that live on its shores and in floating villages on the surface of the lake. The Tonle Sap River connects it to the Mekong River and every year at the start of the monsoon, the swelling waters of the Mekong push the river back into the lake reversing its course. The water level of the lake rises up to 10 meters, increasing the surface five-fold. The flooded forests and fields on the shores of the lake provide a safe haven for young fish that, when matured; migrate all the way to the upper reaches of the Mekong. Due to several severe droughts in recent years this age-old balance has been disturbed. 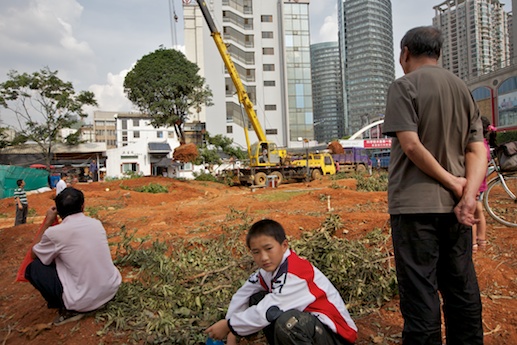 The Mekong River is the second most biodiverse river in the world and one of the few major rivers in the world that has been spared the development that has transformed waterways in most parts of the world. But governments in the six Mekong countries, China, Burma, Thailand, Laos, Cambodia and Vietnam have realized the economic potential of the river. Most dramatic development is the planned construction of almost 30 dams (of which 4 have been built so far) in the main stream of the Mekong River. These dams will severely restrict the migration of fish and will reduce the seasonal fluctuations destroying the fish nursery grounds around Tonle Sap Lake.

And this fish is in trouble. Om Savath director of the Cambodian Fisheries Action Coalition Team in Pnom Penh reports: “We track 27 communities in and around the Tonle Sap Lake and in the past five years fish catches have reduced 40-60 percent in these communities. There are several causes: overfishing, drought and lower flood levels.  We do not know what caused the last two reasons, but the construction of dams might have something to do with it.

Ms. Trandem from the American NGO International Rivers agrees. “It wasn’t until 1992 that these countries realized that dams were being built inside China. When the first dam went into operation they experienced a drought. And last year the worst drought in 50 years coincided with the filling of the reservoir behind the 4,200-megawatt Xiaowan dam [in Yunnan Province in China]. Many people in the lower part of the river called on China to share information. And pointed fingers saying that China’s dams were causing the drought.”

China agreed to share part of its hydrological data with the Mekong River commission (MRC) an organization of the four lower basin states to coordinate development along the river. The MRC, concluded it was not Chinese dams causing the drought but rather climate change.

Trandem: “But if you read through their reports, you’ll see they basically had to use Chinese media as their main reference source. Even the MRC doesn’t seem to have the complete water data sets for the 4 dams. China has only agreed to share information on two of the projects, so far.”

Further south, in Vietnam, farmers raise similar complaints. “In recent years the high water has not reached my fields anymore,” complains Mr. Trinh Minh Tan, a 39 year old farmer in the Mekong River Delta, when he walks through a healthy looking field of rice. “To plant rice I had to use a lot more fertilizer and herbicides than normally. The river provides free nutrients for my fields”

It’s not fair to blame the Chinese defends Prof. Dr Jianchu Xu of the Institute of Forestry Research, on the leafy campus of the Agricultural University of Kunming, in Yunnan. He explains: “There’s a lot more at play like climate change, melting Himalayan glaciers, increased monoculture along the river banks. These and many other factors play a role. And besides that: the lower basin discharges more water in the Mekong River than China. So lower stream development has more impact than Chinese dams.”

The lower stream development Mr Xu is talking about is the plan of the Lao government to build the giant Xayaburi dam. This proposed 1,260-megawatt dam will block the Mekong just north of Vientiane. Vietnam, Cambodia and many international NGO’s strongly oppose the dam. The MRC concluded that the environmental impact assessment was not sufficient and advised a 10-year moratorium on the construction. A decision that still has to be taken by the ministers of all 4 countries.

Chinese officials see it all positively. They say they are aiding the environment, not harming it. Building dams “is an important step taken by the Chinese government to vigorously develop renewable and clean energy and contribute to the global endeavor to counter climate change,” announced Song Tao, the country’s vice minister of foreign affairs at the summit meeting of the MRC in April. 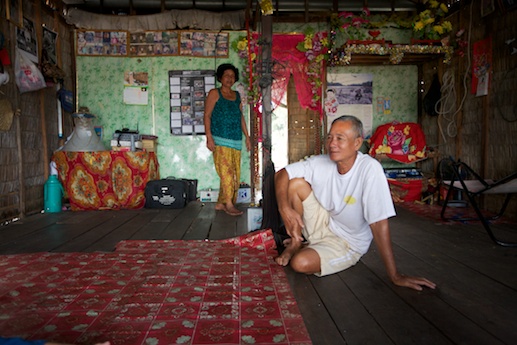 Back at the Tonle Sap Lake, 58 year old fisherman Mr Eng Kimchou, explains the effects of a declining fish catch. Until a few years ago I only ate big fish. I sold the little ones. Now I eat the small stuff myself because there’s hardly any big ones left.

Our village looks prosperous, but 90% of us are in serious debt with the banks. Our wooden boats and floating houses need a lot of maintenance. If this continues for another five years we’ll have to sell everything. And then where will we go? Farming is no option. We have no land in a floating village.
Words: Ronald de Hommel / André van der Stouwe 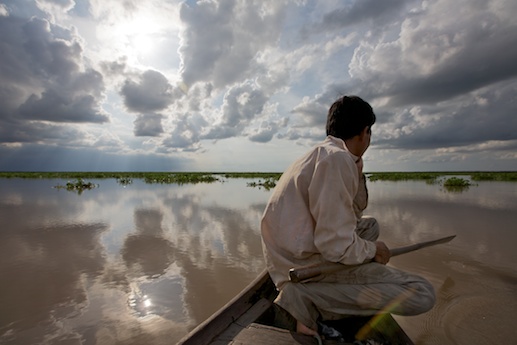